THE ART OF PROTEST

Art has a unique ability to communicate, persuade, generate controversy, raise awareness, and encourage people to question their preconceptions and beliefs. It can be a powerful motor of revolution, hence art’s relationship with politics has a long and charged tradition. In the tumultuous times we’re currently experiencing, however, with democracy being challenged from all sides, and with issues such as climate change, extremism, racism, and gender inequality ever higher on the news agenda, contemporary artists around the world are creating individual tools of resistance, using art not only as a medium to shine a light on authoritarian regimes, patriarchal systems, or the consequences of global capitalism, but also as a powerful instrument for meaningful critique, reform, and reinvention.
Nonetheless, politically engaged art is often criticized. Many of its critics doubt the artistic quality of activist art, and dismiss it as too superficial, obvious, or banal: “Art can also be used for political purposes, but that is not political art, that is art propaganda,” argues political artist Tania Bruguera. “Political art has doubts, not certainties; it has intentions, not programs; it shares with those who find it and does not impose itself on them; it defines itself as it is made; it is an experience, not an image; it is something that enters the realm of emotions and that is more complex than a unit of thought.” But this is exactly the point on which a younger generation of artistic activists disagrees. They believe that complicated and difficult times require a clear stance. They demand change, and they demand it now. They stand up against racism, rising inequality, environmental degradation, digital disinformation, corporate greed, and resurgent nationalism, they support protest movements such as Black Lives Matter or Extinction Rebellion, and raise their voices for more diversity and equality—using the proven means of propaganda and creating suggestions for a new (and better) world. Societies are constantly negotiating. Things are in flux. To change the world, we must first reimagine change—and the ability to imagine the world differently is perhaps the most important aspect of art. “Is the imagination of art, our capacity to think, stage, compose, choreograph, and construct the world differently not of crucial importance for the opposition against the construction of ultranationalist social reality?”, Dutch artist Jonas Staal pointedly asks. “And should our task as artists, as those who have trained and specialized in representation, not be to join forces with those who demand a different conception of society?”
The Art of Protest explores this connection between art, politics, and activism today, revealing how, over the past decade, artists have been engaging with political and social issues through mediums ranging from painting to sculpture, from installations to performance, and from photography to digital work. Featuring the work of more than 70 artists, in-depth commentary, and five essays looking at art’s role in revolt—from graffiti that blossomed in the Arab Spring to using the body to protest oppression—a new wave of feminist art intertwining racism, misogyny, trans rights and classism, digital activism as a potent instrument in the formation of movements beyond the digital world, and the legacy of global colonialism that has become one of the most pressing issues in art, where decolonization has to be also about institutional critique—about how colonial action and thinking affect the way museums and the art system function, and the distribution of power within the art world. The Art of Protest contextualizes and acknowledges art as a tool for political critique and a powerful agent for change. As American writer and civil-rights activist Toni Cade Bambara said: “The role of the artist is to make the revolution irresistible.” 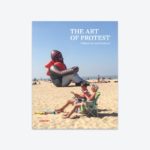 THE ART OF PROTEST